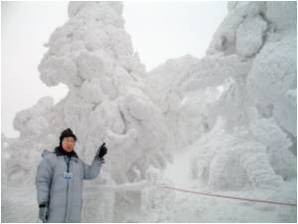 MedIndia. (2008). Industrial Pollution in China Takes Toll in Japan [on-line] URL: http://www.medindia.net/news/industrial-pollution-in-china-takes-toll-in-japan-35000-1.htm (21 March 2014)
The wet winds causes the formation of juhyo, or ice trees, by forming layers of ice and snow on trees. Every year, tourists travel to Mount Zao to appreciate the beautiful scenery presented by the juhyo. However in recent years, the frost on juhyo are mixed with acid and the acid might cause harm to the trees if the acid continues to remain in the frost. In 2008, the acid level reached the highest and after an investigation conducted by professor Junichi Kudo of Tohoku University and assistant professor Fumitaka Yanagisawa of Yamagata University, it was found that the acid came from sulphur produced at factories in China's Shanxi Province (Hasegawa, 2008). This was the first case of cross border pollution in Japan caused by China.

Case study 2. Possibility of cross border pollution in US

Polluted air from China can easily be carried over the Pacific Ocean to other parts of the world through westerly wind that flows across the mid-latitudes of the Northern Hemisphere. With suitable weather conditions, contaminants like mercury and nitrogen oxides are able to reach the west coast of US from China in a matter of days (Levitt, 2013).