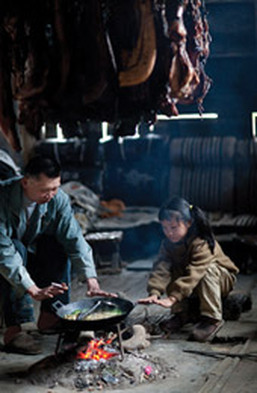 Oregon's agricultural Progress. (2012). A chemist travels the globe tracking airborne chemicals that end up in us [on-line] URL: http://oregonprogress.oregonstate.edu/summer-2012/something-air (21 March 2014)
Other than facing water pollution and air pollution (blown from the urban cities to the rural areas), the biggest source of pollution in rural areas is actually the indoor pollution caused by burning of solid fuels.

Most rural residents, and even some urban residents, in china make use of solid fuels for cooking and/or heating. According to the global meta-analyses of epidemiologic studies, indoor air pollution due to the use of solid fuels is responsible for around 420,000 premature deaths annually (Zhang; Smith, 2007) and burning of solid fuels are the main source of deaths due to indoor pollution in rural areas. Despite the health risks, rural residents have no choice but to continue using solid fuels, as they are unable to afford safer and more efficient fuels. Even if the households have access to electricity, they cannot afford to use it for cooking and heating. (Wang, 2005)

Adding on to this problem, the rural residents are also often unable to afford healthcare services or treatment. Recap on Lack of education and healthcare in rural China For example, in December 2013, a group of elderly committed mass suicide in a rural village. This was so as they could not pay for their health care, and did not want to be their children's burden. (China outlook, 2014)

In the 1980s, China's government organised the National Improved Stove Programme (NISP), the world's largest publicly financed initiative to improve stove function. In this programme, biomass stoves which are more efficient for cooking and heating were given to the rural households througout China. Along with the biomass stoves, chimneys to vent smoke from households were also provided and this greatly reduced the smoke trapped in the house thus reducing the chances of the rural population getting ill because of indoor pollution. However, in the expansion of NISP to improve coal stoves, chimneys were not provided hence not being able to reduce rural indoor pollution further. (Peabody; Riddell; Smith; Liu; Zhao; Gong; Milet; Sinton, 2005)

Although NISP managed to reduce rural indoor pollution, indoor pollution in rural areas still remain as a relevant problem due to the high death rates experienced by the rural population.
Proceed