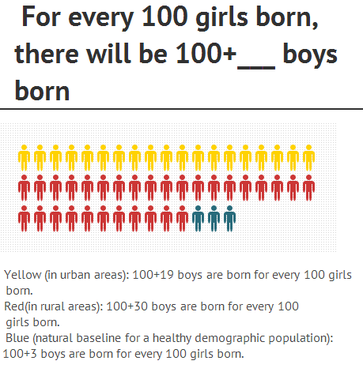 The Chinese Academy of Social Science's study concluded that for every 119 boys born in China, only 100 girls are born, and this is substantially higher than the natural baseline for a healthy demographic population, which ranges between 103:100 and 107:100. In some areas, especially in rural, the ratio of boys and girls could be as high as 130 to 100. It is projected that by 2020, 24 million men will not be able to find wives. (Wikipedia, 2014).

Due to the long period of time learning Confucianism (where men are portrayed as the dominant leaders while the women are weak submissive) and using it as a way of life for Chinese, males are more preferred to females in China, especially in the rural areas in China. This is perhaps because of the fact that males in rural families are able to contribute to agriculture and farming work better than females due to physical built as well as the long tradition of having males as the head of families. Whereas in the urban area, gender inequality can be spotted through many aspects of urban living and females usually face discrimination in certain jobs example doctor. In both areas, males are seen to be more capable than females hence are more ready to support the family financially and mentally. As a result, a preference for males to females is resulted.

The traditional mentality of the majority of the Chinese population on gender caused the high male-to-female sex ratio in both rural and urban areas in China. ("One-child policy", 2014, "Effects", para.2).

Women were also discriminated in other aspects of life like workforce participation, education and political participation. Out of 142 countries which were involved in the calculation of the United Nations Development Programme's Gender Inequality Index (GII) 2011, China was ranked 35th (Wikipedia, 2014) which meant that compared to other countries, China's inequality is relatively high. In 2011, it was found that 54.8% of women (aged 25 and older) had completed ﻿secondary education or more (Wikipedia, 2014), lower than the 70.4% for men. In workforce participation, women's labor force ﻿participation rate was 67.4%, also lower than the 79.7% for men. This could be caused by the fact that less women than men had completed secondary education or more as mentioned above. Lastly, in terms on political participation, women representatives constituted 21.3% of seats in national parliament while the men constituted the rest of the seats (Wikipedia, 2014).

Effect of one child policy on demographic population: Female infanticide

One child policy has worsened the already upset China's demographic population due to the pre-existing gender inequality through female infanticide.

Acts of selective abortion started in the 1980s, with the introduction of ultrasound technology. In the early years about the introduction of the one child policy, forced abortion was very widely carried out (Wikipedia, 2014). According to Chinadaily (2012), one-child policy has resulted in the “prevention” of approximately 400 million children. Since for many households, they will only have once giving birth to a baby, most of them want to make sure that their child will be a boy. As a result, in many of these abortion cases, abortion was carried out due to the prior knowledge that the baby they were carrying is a baby girl. The Chinese Academy of Social Sciences reported that the one-child policy that made abortion for many pregnancies "mandatory", combined with gender-selection and a cultural preference for boys, has created a gender imbalance that will result in 24 million men unable to find a wife in 2020. With a higher abortion rate of female babies than male babies in China as a result of one-child policy, coupled with the traditional preference of boys over girls, the number of births per year of girls will be lesser than boys, resulting in a worsening of an upset of demographic population.

To tackle this problem, the Maternal Health Care Law of 1994 strictly outlawed the use of technology like the ultrasound machine to identify the gender of a foetus (Anonymous, n.d.). However, in rural areas where one-child policy is more relaxed and have looser surveillances on the fertility rate of rural population,  physicians continue to use them to determine the gender of foetuses.

The high male ratio in China might not be actually that high due to the fact that there are plenty of cases of underreporting of female births and statistics had shown that these cases account for about 43% to 75% of the difference between the reported sex ratio at birth. (Anonymous, n.d.).

Underreporting of female births can happen under 3 scenarios.
Firstly, the infant baby girls were abandoned by their parents and died before they were found by social workers.
Secondly, rather than being abandoned, the female births just went unregistered.
Lastly, the infant baby girls were abandoned and consequently found by social workers and brought to orphanages.
The only common thing among these three scenarios is that the future and survival of those underreported female infants will be endangered.

In the first scenario, abandoning infant babies in most cases, is as good as killing them hence this intentionally decreases the female sex ratio at birth, contributing to the further upset of the demographical population in China.

In the second scenario, even though the infant baby girls are able to survive and grow up, they will not be able to receive proper medical attention, education and other state services since they do not have legal existence. In fact, The New York Times (2000) reported that there were many "illegal" children born in secret and according to unannounced spot checks by the government, there are some villages with up to 40% of undercounts (Anonymous, n.d).

Lastly in the third scenario, the Chinese infant girls will be brought to orphanages after they are found by social workers or people on the streets. However, a British TV documentary unveiled the degrading orphanages and the unsanitary conditions that followed. (Anonymous, n.d.). Documentary producer Brian Woods found that 95% of the babies in the orphanages were able-bodied girls and the rest of the 5% were mentally or physically disabled males (Anonymous, n.d.). This shows that the infant female babies were not abandoned due solely to misfortune, but highlighted the underlying gender bias against females in the Chinese society. Such gender bias were pressurised into actions of actual abandonment by one-child policy as families will only have "one child slot" and driven by desires, they will do anything they can to preserve that spot for a male baby.