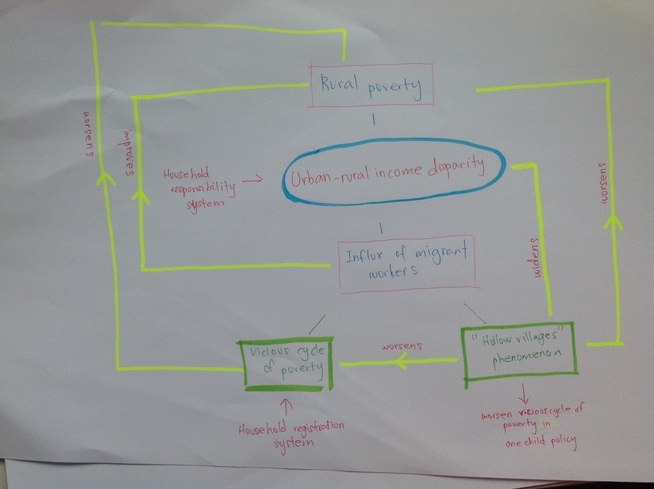 Before the household responsibility system was introduced, everyone who worked in the agricultural sector had the same income, no matter how much work and effort they contributed. However, the new system then allowed everyone to be paid according to their produce. For example, if a poor farmer could produce crops in high quantity and high quality, his income would be higher. This system greatly improved rural workers' production incentives and wherever the household responsibility system was used, the agricultural production increased tremendously (Justin et al., 2003, p.144). Statistics had shown that the total agricultural growth and average annual growth from 1978 to 1984 (before and after the wide use of the system), had significantly improved from 6.05% to 42.23% (Figure 1) (Justin et al., 2003, p.145). 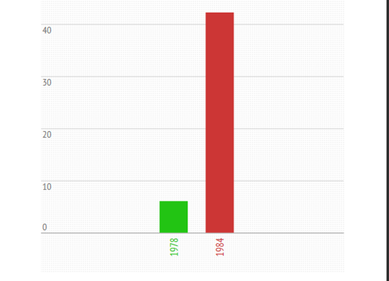 Figure 1.
Rural workers benefitted from this increase of agricultural production and the quality of lives of the rural workers improved significantly. An economic study also revealed that the household responsibility system was responsible for 46.89% of the total output increase during this period of time (Justin et al., 2003, p.145).

Since many rural workers were brought out of extreme poverty through the household responsibility system, rural income was also generally raised, decreasing the rural-urban income disparity. However this decrease was not enough to bring China's urban-rural income disparity level to an insignificant level. 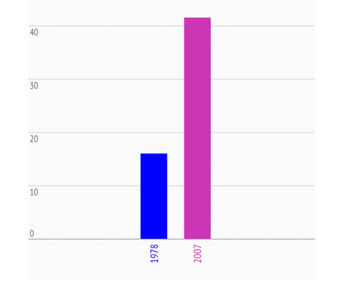 China's rapid economic growth and urbanisation rate is one of the main reasons for the big urban-rural income disparity. Before the economic reform since 1978, China's GINI index (a representation of income distribution of a nation's residents) was at 16% ("Rural Urban Income Inequality in China", 2014, "Emerging rural urban income gap", para.1). However after the economic reform, China went through a great economic growth and rapid urbanisation rate. In this period of time, many industries were built in the urban areas and the economy in urban areas prospered. The income of urban inhabitants then grew rapidly while the rural inhabitants, being left out from this industrialisation process, did not receive much increase in their income except from the household registration system. As a result, the gap in between the urban and rural areas in China then widened and China's GINI index reached 41.5% in 2007 and ranked 29th worldwide (Figure 2.) ("Rural Urban Income Inequality in China", 2014, para.1).
Although the growth of income due to the fast economic growth has improved rural poverty, it is still unable to match the rapid urbanisation rate. As a result, urban-rural income gap continues to widen every year due to the on going urbanisation and economic growth.  China Daily (2010) reported that China's urban-to-rural income ratio was 3.33 : 1 in 2010 and has reached the highest level since 1978. A survey conducted by the Economy and Nation Weekly magazine of Xinhua news (2009) showed that 34 out of the 50 leading Chinese economists felt that income inequality is a challenge to China’s sustainable development ("Rural Urban Income Inequality in China", 2014, "Cause for concern", para.1).

Other than the household responsibility system, urban-rural income disparity was also decreased by the influx of migrant workers in the urban areas of China. Because the migrant workers who go to the urban cities to do non-agricultural work have higher income, they lead a better life in the cities (also because of the better living environment in the cities) and they will send a larger amount of money back to their families living in the rural areas. The problem of rural poverty is improved and the rural population also leads a better quality of life thanks to the family members who migrate to the city to work. Urban-rural income disparity also decreases as a secondary effect.

However, a widespread phenomenon in the rural areas - "hollow" villages -  caused by the influx of migrant workers in the urban cities causes an increase in rural poverty. This is because "hollow" villages result in less agricultural production and in conjunction with the household responsibility system, where the wages received by farmers are determined by the agricultural production, households in the rural areas receive lesser income and rural poverty worsens. This, again, directly affected the urban-rural income disparity, causing the gap to widen.

In﻿ the rural areas, the only way out of poverty is to study well and get into a university through getting good results in the national college entrance examinations so that they are able to find non-agricultural jobs in the cities. However, children in the rural areas face an inequality in education.

The schools in rural areas do not have a standardisation of syllabus with the government funded schools in the urban cities. Moreover, due to the fact that private schools usually do not receive sufficient fundings, the wages received by the teachers are usually very little hence very little professional and talented educators are left in the village (most of them choose to go to schools in the urban cities to teach due to better treatment). Moreover, unlike the students in the urban cities, students in the rural areas do not have access to libraries, well-trained teachers and intellectual spaces like the computer labs etc.

Despite the attempt by the Chinese government to enforce a 9-year compulsory education (6 years in primary schools and 3 years in junior secondary schools) in rural areas, the drop out rate in rural areas is still high. The urban primary school enrollment rate is 4/3 times more than the rural enrollment rate. Most children from peasant families are usually forced to drop out of schools at the junior high, or even primary level. They are thus unable to take the national College Entrance Examination to further their studies at institutes of higher learning.

The hukou system also partially caused the inequality in education. In the system, non-urban hukou holders discriminated against and were treated as second-class citizens, denying them access to state services. (Foucault,  2013)

Recap on the household registration system

All students are required to take the National College Entrance Examination, which is very important to Chinese students as it decides which university they will be entering, in the county to which their hukou belongs. For those taking the examination in the rural parts of China, the format of the examination might be different from what they are used to in the city. Also, they are often required to perform better than the urban students in the examination in order to be admitted into a particular university. (China Labour Bulletin, 2012)

From this, we can tell that the hukou system restricts the migrant students from furthering their studies due to the unequal treatment. Adding on to this problem, the hukou status of each person is inherited from his/her parents, so it is difficult to improve the fate of a child born in a rural family.

As a result, the inequality in education  in a vicious cycle as the poor will almost always stay uneducated and unable to improve their social status. Thus, as the urban residents get more opportunities to further their studies and make themselves eligible for more high-paying jobs, the migrant workers from rural areas would be trapped in poverty and these widen the urban-rural income disparity.
﻿

In the past decade, Rural China Education Foundation (RCEF) started the Extracurricular summer camps whereby students, adults and young professionals from overseas travel to rural China and give them lessons for free (Tory, 2014, p.5). The volunteers will receive an one week training and they will conduct lessons on health education, community research which are relevant topics for the rural children. The result of such camps were positive. However, due to the fact that the volunteers are unable to stay in the rural areas permanently and rural children only receive such education when there are summer camps, the impact that last on rural children will not be permanent.

"One Kilogram" rural library program run by volunteers also tries to tackle the problem of lack of educational materials in rural areas of China. The free reading materials are usually donated by people or purchased by charity groups and each volunteer has to carry extra one kilogram of educational material when they visit the rural areas in China (Tony, 2014, p.5). To date, 900 elementary schools in rural China benefitted from "One Kilogram" programme (Tony, 2014, p.5). However, this programme will not have a very significant impact on the lack of education in rural areas as even if there are sufficient educational materials, illiterate children or children who do not go to school regularly will not be able to benefit from such donations.

Donations by private organisations or philanthropists will help to improve education opportunities and quality in rural areas. The money donated can be used to attract teachers with better qualifications from around the world to improve the education standard in rural China. Private schools can be built to provide more rural children with education and enrichment activities to better develop rural children in other areas can also be carried out with the extra funding.

The China Agricultural Radio and TV school has provided over 133 million person-times training in applicable technology for work in the rural areas of China (Anonymous, 2006). This school has nearly 300 branches and 46000 teaching and administrative staff (Anonymous, 2006). Through the use of technology like radio, television, satellite, audio and video materials, the school managed to educate a large group of people in the rural areas of China without having to send people over or build education centres in rural China.

Over the period of 2006 to 2009, the Central government had also completed a project of modern distance education for children in the rural parts of China. TV,VCD,DVD equipment were provided to about 110000 rural elementary schools. 380000 elementary schools were also equipped with satellite radio and television receivers for better transmission of data and 40 000 rural junior high schools were provided with computers and Internet (Anonymous, 2006). All of these modern technologies implanted in the classrooms of schools in rural China allow the establishment of global classroom through internet and transmissions and the quality of education will also be improved.