Influx of migrant workers - a stratified group of people 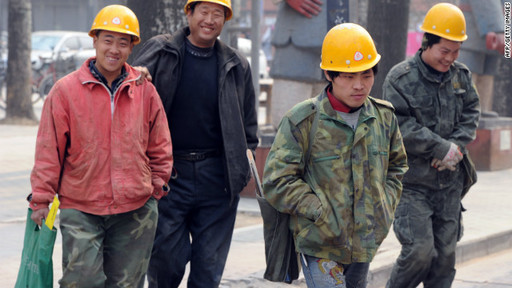 
The influx of migrant workers from the rural states eg. Sichuan, Henan, Hunan etc. to the major cities in China eg. Beijing, Shanghai has brought about a new stratified group of people in China. This mobile group of people, which makes up more than 20% of the total population in China, are not considered as urban inhabitants since they do not have the family register (hukou) of any urban cities but they cannot exactly be called rural inhabitants as well due to the fact that they spend long period of time living in the urban cities. This group of people (the first and recently, the second generation of migrant workers) was a product of China's urban-rural income disparity.

As a result of the urban-rural dualism, different privileges are given to the urban and rural areas. In urban cities, foundations like communication, transport, healthcare, education etc are advanced and user friendly. However, in the rural areas, villagers faced a series of problems regarding the lack of proper healthcare, education as well as inefficient transport and communication. Till now, the doctor density in urban areas in China was more than twice than in the rural areas in China (Anad et al. 2008).

﻿Under the influence of heavy industralisation, big factories and companies are the main sources of income in the urban cities, while small private business and agriculture are the only sources of income in the rural areas in China.﻿ This results in a great urban-rural income disparity. Due to better living conditions as well as higher pays in the big cities, many villagers, especially young men, are migrating to the cities to do non-agricultural work since the 1980s. In the urban cities, average monthly salary continues to rise every year, attracting more and more migrant workers to move to the urban cities to work. In 2012, the average salary rose 11.8 percent to 2,290 yuan. (Sophie, 2013).

Due to higher wages received by the migrant workers, they are able to send large amounts of money (in comparison with the amount earned through agriculture in rural China) back home. In fact, it is these sum of money earned in the cities and sent back to the rural areas that managed to decrease urban-rural income disparity in China. Moreover, since the migrant workers are still counted as rural inhabitants since their family register (hukou) are that of rural areas, an increase in the wages they bring home every month signifies that the situation of rural poverty is improving. However, the problem brought about by the influx of migrant workers - "hollow" villages phenomenon - in turn worsens rural poverty. 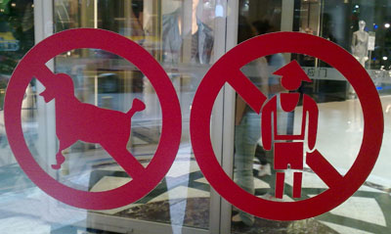 Anonymous. (2009).农民与狗不得进入. [on-line]. URL: http://bbkk1982.blog.sohu.com/119172628.html
Like every other global cities and countries, migrant workers in China receive certain intensity of ill treatments and discrimination from the urban inhabitants. The migrant workers make up almost half of China’s urban workforce and 20% of the urban population. Their work in the industrial sectors in China has accounted for half of the country’s GDP (Hsiao, 2012). They are a crucial part of China’s development and urbanisation, however, they are also the most marginalised and stratified group of people living in urban China (Hsiao, 2012).

Due to the Hukou system (Recap on poor welfare of migrant workers), they are denied access to public services and they work harder than almost all of the urban inhabitants. However, their low educational background and the fact that they came from rural areas caused them to be viewed as the lowest class living in the urban cities. Scenes where adults and children shout at them for their actions in public are not uncommon.

In the 1920s, the westerners put up signs “No Dogs or Chinese” in parks and many other public areas. However, in present day China, signs indicating “No Dogs or Peasants” are imprinted on the glass doors of many higher class restaurants and shopping malls (Hsiao, 2012). This shows how lowly respected the migrant workers (mainly called peasants) are and gives us a picture of their place in the society.

Moreover, negative internet slangs and phrases are used to describe rural to urban migration. One of the examples is “mangliu” which under direct translation means “blind flow” (Hsiao, 2012). This phrase has an irrational, senseless and rowdy feeling which also reflects the negative attitude of the society towards the migration of migrant workers into the urban cities.

China's hukou system will be going through a reform, becoming less strict. There will be fewer restrictions for the farmers migrating to the medium or small sized cities, thereby reducing the inequalities that migrants have been experiencing. (An, 2013) According to analysts, this reforms will be an important step to allowing free movement of labour and encouraging urbanization.  Even though it is inevitable that there still be some strict rules applied to the hukou system in the large cities like Beijing and Shanghai, the reform would still be beneficial in increasing the number of workers in factories which struggle with the high demand of work. (Ranasinghe, 2013) Other than workers, students also benefit from the reform, for instance, it would be easier for rural children to be enrolled in city schools. This way, migrant workers are not forced to leave their children in the rural areas while they work in the city. Studying in the city, as compared to studying in the rural areas, is very beneficial as there are proper study materials for the students. (Hornby, 2013) This reform will thus also have a potential to break the vicious cycle of poverty of the migrant workers' generation and reduce the social problem of stay-at-home children.