The World Bank Organization (2008-2009) describes poverty in this way:

In general, poverty is a state of not having the necessities of survival - food, water, shelter, healthcare, sanitation, education - met and a state of living a low quality life. 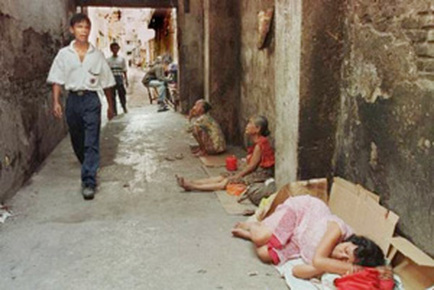 Read more on Problems brought about by "hollowing" of villages

Since the start of the economic reform in China in 1970s, industralisation has been heavily carried out and China's economy and global ranking has bloomed and risen rapidly. In 2013, China ranked the second, closely behind United States, in Gross Domestic Product of a country, which is a good representation of China's wealth.

Figure 1.
Through this flourishing of economy, China has become the first developing country to achieve the United Nations Millennium Development Goal of reducing half the number of its people living in extreme poverty and hunger (from 85 million to 35.97 million, mainly attributed to the sending home of wages by migrant workers) (Figure 1) (IFAD, n.d.). However, it seems that the current GDP growth is still not enough cover for China's 1.3 billion population size, as seen from the fact that many more people are still stranded in poverty, mostly caused by the widening of urban and rural income gap (IFAD, n.d.).

World Bank (2012) stated that China has about 128 million people living below the national poverty line, making China second only to India in terms of the largest population of the poor (98.99 million rural poor in 2012). The main source of poverty comes from the rural areas in China since more than 50% of the population live in rural areas (Tiezzi, 2014).

Other factors contributing to rural poverty:

1. Lack of education and healthcare in rural China

Unequal distribution of education and healthcare are two of the primary causes for the worsening rural poverty.
Recap on inequality of education in rural areas widens urban-rural income disparity

According to the World Health Organization (WHO), China's health expenditure per capita in international dollars ranks  at 139th and in the ranking of overall health system performance, which takes into account the fairness of access to health care and individual contribution cost, China ranked 144th, way behind other developing countries like India (112th) and other Asian countries. Almost half of China's population live in rural areas but only approximately 20% of health and medical services are found in the rural areas; 80% are concentrated in urban cities ("Health in China", 2014, "Health indicators", para.1). Healthcare is poorly distributed throughout China and the distribution favours the urban dwellers. This also meant that more than 100 million people in rural area will not be able to receive timely medical care. Despite efforts to improve living conditions in rural areas, people living in the rural areas still face a problem of lack of safe water, sanitation and food. 80% of rural households have no sanitary lavatory and 20% lack safe drinking water (Chelala, 2011). These result in under-nutrition, vitamin, mineral deficiencies and indoor air pollution (Chelala, 2013).

The lack of healthcare centres around multiple villages, coupling with the fact that the medical fees are considered extremely expensive for the rural population, many people choose not to seek medical attention and the perpetual health problems interfere with their ability to do agricultural jobs. This is a realistic problem and affects many households as well as their agricultural production, contributing to the continuation of rural poverty (Malet, 2010).

An examination is taken by students in their fourth grade to determine whether or not they are literate. Statistics have shown that in 2010, about 3.5% of the population in China were illiterate and this number fell greatly from the 80% in 1949 (Fan, 2007) .However, Tang Qian, assistant director-general for the education sector under UNESCO stated that "Although China has maintained strong progress toward universal adult literacy, its illiterate population is still one of the biggest in the world". (ANI, 2011) Indeed, despite the drastic decrease in the illiteracy rate over the past 50 years, the illiteracy rate in china accounted for 11.3% of the world's total illiteracy rate (Fan, 2007). (Moreover, this number is under calculated due to the fact that in the rural areas, many students who had passed the examination usually do not pursue further studies hence they eventually forgot the skill and returned to being illiterate. According to 2000 census data, three quarter of the illiterate people between ages 15 and 50 are from the rural areas in China and most of them are women. Currently, China has 55 million illiterate women and most of them reside in the rural areas (Xinhua News Agency, 2011).


Back in the 1990s, a research was conducted to investigate the causes of rural poverty and one of the hypothesis was the high illiteracy rate in China. However, it was later concluded that the high illiteracy rate in China was insignificant in worsening or contributing to rural poverty. Some of the possible reasons for this conclusion were that a few decades ago, households in the rural China still had strong social structure and the elderly were the decision makers for agricultural production. These elders were usually men and were illiterate. Moreover, due to the traditional farming techniques used then, very skilled labour which tend to include literacy was not required in order to yield good produce. As a result, the high illiteracy rate did not play a significant role in worsening rural poverty (Georgia, 2009).

However, presently, high illiteracy rate in China has become an increasingly significant cause for the worsening of rural poverty. This is mainly attributed to the "hollow" villages phenomenon in rural villages caused by the influx of migrant workers from rural to urban China.
Recap on "hollow" villages phenomenon
The large amount of males in the rural areas migrating to the urban cities in China has resulted in femininity in farming due to the fact that only women, elderly and children are left after the males migrate to the cities. Since most of the illiteracy in rural areas comes from the women, and the usually illiterate women are playing a greater role in agricultural activities, the high illiteracy rate is affecting farming more and more. Even though traditional farming techniques are still widely used in the rural areas, to keep up with the growing need for agricultural production due to the expanding population, knowledge on how to increase efficiency and effectiveness of farming is becoming crucial. However, since most of the women in villages are illiterate, it is hard for them to assimilate such knowledge. As a result, the high illiteracy rate in rural China contributed to the decrease in agricultural production in many villages which in turn worsens rural poverty. (Wu, G; Richardson, S; Travers, P, 1996).